Kanye and Music: Both Evolve Over Time 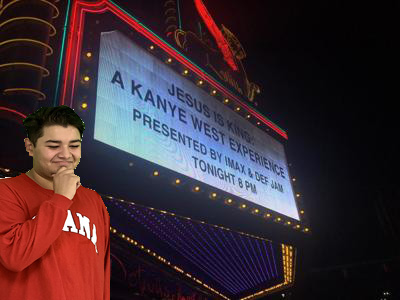 “What if I made a song about Kanye called I Miss the Old Kanye? Man that would be so Kanye.”

Kanye West: One minute he’s preaching from the Bible; the other he’s shouting out at the top of his lungs. West is well known for his constant mood switching, and it has begun to define him.

This time around, West dropped an album that follows his journey into spirituality. The album was named Jesus Is King and features a variety of West’s talents. Although, known for his foul tongue, the album contains no cursing. This was a massive surprise to many of West’s fans. The album features songs like Closed on Sunday and Follow God. Many of the tracks, if not all, relate in some way or another to West’s faith.

Keeping this in mind, the album received mixed reviews with some, saying they miss the old Kanye. However, this did not seem to quite bother the rapper. The rapper’s true intentions while making the album were to honor and give praise to his God. Despite this, some music listeners are inclined to believe that West is having another one of his meltdowns and are not too keen about the release of the album. Bayron Garay, 10, finds that the album is, “trash. The old Kanye should come back. The Poopy-di scoop Scoop-diddy-whoop Kanye.” It has certainly proven to be an album that contains some strong opinions and elicits equally strong reactions. Due to this, it has become memorable listen for everyone. With this being said, it is up to the listener to decide whether West’s music resonates with him or her.

Whether it’s the old Kanye or the new Kanye, it’s easy to say that Kanye West is by far one of America’s most interesting entertainers. Music is something that constantly evolves—as do the artists. So, today’s Kanye may become yesterday’s in due time.