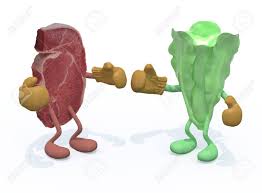 Finally, restaurant owners are taking their mother’s advice to heart: Eat your vegetables. They’re good for you!

Vegans and Vegetarians are on a rise; the trend of meat-less protein has been taking over well-known restaurant chains. The company Beyond Meat launched a product that looks and tastes like a burger patty, but it’s made completely of plants.  Food companies such as Burger King, Dunkin’ Donuts, and even certain grocery stores have started using their products. Taco Bell just recently released a separate menu that is all vegetarian and vegan versions of their main menu foods. Many are excited to finally be able to have vegetarian options at popular restaurants now and making it easier to maintain a vegetarian or vegan lifestyle. For those who aren’t vegetarian or vegan, the new options in menus could be just as helpful to keep healthy and cut down on red meat.

As plant-based foods are starting to become more mainstream, there are still people who believe the only source of protein can come from meat. Those people may believe that the idea of broadening the menu to include meat-less options is a useless idea. Marijn Plomp, 11, who admits to liking the vegetarian lifestyle, voices her opinion: “Adding new options is a great idea because it’s good for people’s health and even good for the environment. I think people need to be more open to others’ lifestyles, even if they don’t want to try it themselves”.

With plant based proteins continuing to become more popular and becoming a normal offering for restaurants, people need to broaden their views and try something new. Who knows, they may end up liking veggies a bit more.