Are you getting enough sleep?

Most of our generation is sleep deprived, and they don’t even know it. Here’s why. 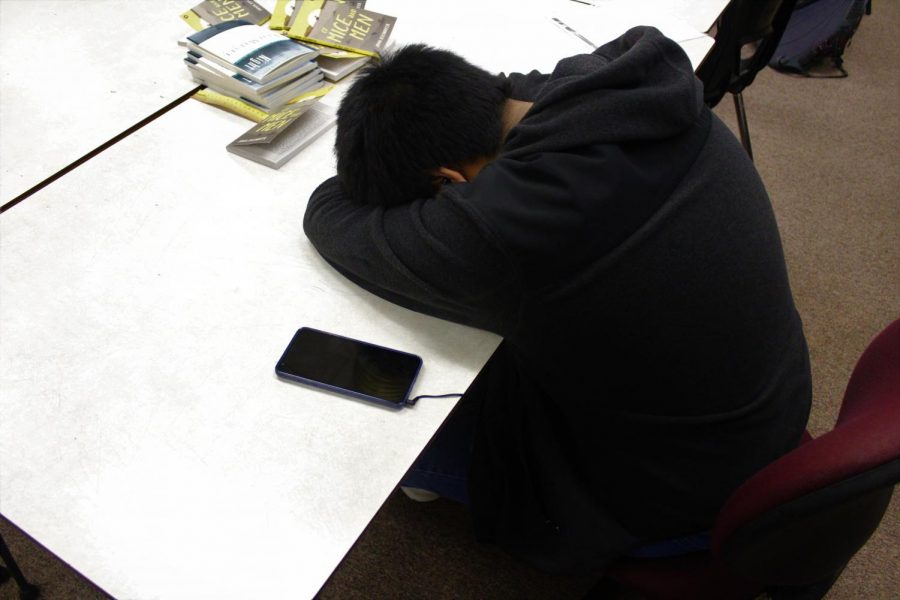 Junior Richard Bautista catches some Z's during GENESIS on Friday, Jan. 31. Sleep deprivation occurs all throughout Memorial, especially in class.

Have you ever gone to school wishing that you could have gotten that extra hour or two of sleep? Well, you’re not alone. According to a survey from 2006 conducted by the National Sleep Foundation, about 87% of students go to school sleep deprived.

The recommended amount of sleep for a teenager is nine hours of sleep a night, but only 9% of students are actually getting that.

Actually, 20% of students are getting less than five hours of sleep regularly. It sounds absolutely impossible for teens to fit in nine hours of sleep, get everything done that is expected of them and enjoy life.
Why are teens sleep deprived?
There are a number of reasons why most teens are sleep deprived, and some of those reasons have nothing to do with binge watching Netflix late into the night. For example, when going through puberty, the internal clock changes, making the body stay awake longer. This is something that teens can’t help.

It is also difficult for most teenagers to balance everything that is expected of them while being successful in their classes, athletics, musical ambitions or whatever they are interested in doing. To top it all off, some teens even have jobs that they are cramming into their already busy and stressful lives.

The reason that students need nine hours of sleep is because there is a sleeping cycle called Rapid Eye Movement (REM).

People go into REM sleep after resting for about 90 minutes. They also go through stages called Non-Rapid Eye Movement (NREM) sleep which is a light sleep in which people are easily awoken from.
Why is REM sleep so important and what is it?
Well, people primarily go through physiological changes: accelerated respiration, increased brain activity, eye movement, and muscle relaxation.

The first period of REM usually lasts around 10 minutes, each stage of REM becoming longer than the previous one.

A person’s face, fingers, and legs may twitch during this, but that is normal. Intense dreaming also occurs during the REM cycle as well as paralysis which prevents a person from acting out their dreams (sleep walking). It also restores a person’s energy, and contributes to their physical and mental well-being.
What can you do to get more sleep?
Well, there are multiple things a person could do in order to improve their sleep schedule.

First, they can try waking up and going to sleep at the same time every day. This means they must avoid oversleeping on the weekends.

Another tip a person should follow if they want to get more sleep is that they need to aware of time. They should pay attention to the time when it starts to get late.  If they are watching television, playing video games, or just doing something that they enjoy, they need to make it a priority to go to bed at a set time.

People who want to get more sleep should also avoid caffeine, smoking, alcohol, and drugs because they negatively impact a person’s sleeping schedule.

If you still aren’t able to get a proper night’s sleep then schedule an appointment with your physician and tell them about your experiences with sleep.